UI5: per-view Internationalization - What about inheritance?

I started to learn UI5 in earnest in september 2016. Quite soon after that I wrote two blog posts about per-view internationalization:

(In case you're wondering: per-view internationalization is the ability to maintain i18n.properties files, which contain translations for human readable texts together with the view code wherein these texts appear, rather maintaining just one giant i18.properties file that contains the translations for any and all internationalized texts that appear throughout the application. I think the benefits of this idea are clear from a developer's point of view. If you're interested in more information about this concept, then please check out the two blog posts I wrote prior)

The reason for me to revisit the topic is that I found that the method I use to figure out which i18n.properties files to load, doesn't work very well when you're using inheritance. In UI5, inheritance is achieved by calling the extend-method on the constructor you want to inherit from.

To understand why it doesn't work well, we should first define the scope and the desired behavior.

A Per-view i18n solution that works with inheritance

The following code will solve this problem: Note that this code replaces the _initI18n-method that appeared in my prior blog posts on this topic. It is also assumed that this method sits in some abstract base controller, which you'll extend to create actual concrete controllers for your views.

Here are a couple of highlights that explain the new and improved _initI18N-method:

To whom it may concern,

one week ago, Friday, 9th of June 2017 I was at the Dutch house of representatives ("de tweede kamer") to participate in the 2017 Accountability Hackathon. 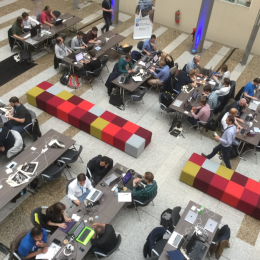 The event was organized and sponsored by a number of Dutch ministeries, the Court of Audit ("Algemene Rekenkamer"), the Central Agency for Statistics ("Centraal Bureau voor de Statistiek") and the Open State Foundation. Goal of the event was to invite programmers, developers, data analysts, journalists and so on to come together and create applications that use one or more of the numerous open data sources published by the Dutch government to create insights in the performance or the spending of Dutch governmental or publicly subsidized organisations.

This assignment alone might need some clarification. In Dutch democracy there has always been a push towards more transparency. But in the last decade in particular, there has been an increasing demand to provide this transparency by publishing openly accessible data sets. The idea is that publishing records and metadata contributes to an environment where civilians can answer any question about how their government is functioning themselves, by querying and combining their data. Now, obviously, not everybody is capable of working with raw data sets, so there is also a demand for tools, applications and people with know-how bridge the technical gap and truly making all this data available on a functional level.

This is where events like the Accountability Hackathon come in: it is a direct attempt to stimulate individuals, but also commercial companies to apply their expertise to create applications and tools that provide meaningful information and insights, based on open data.

Just BI has a policy of assigning consultants to billable projects for at most 80% of their working time; The remaining 20% is meant to be invested in knowledge development. We try to align agendas and meet each other every friday at our office in Rijswijk.

This arrangement made it possible for me to attend an event like the Accountability Hackathon - in fact, Just-BI stimulates its consultants to reach out and participate in events like these. 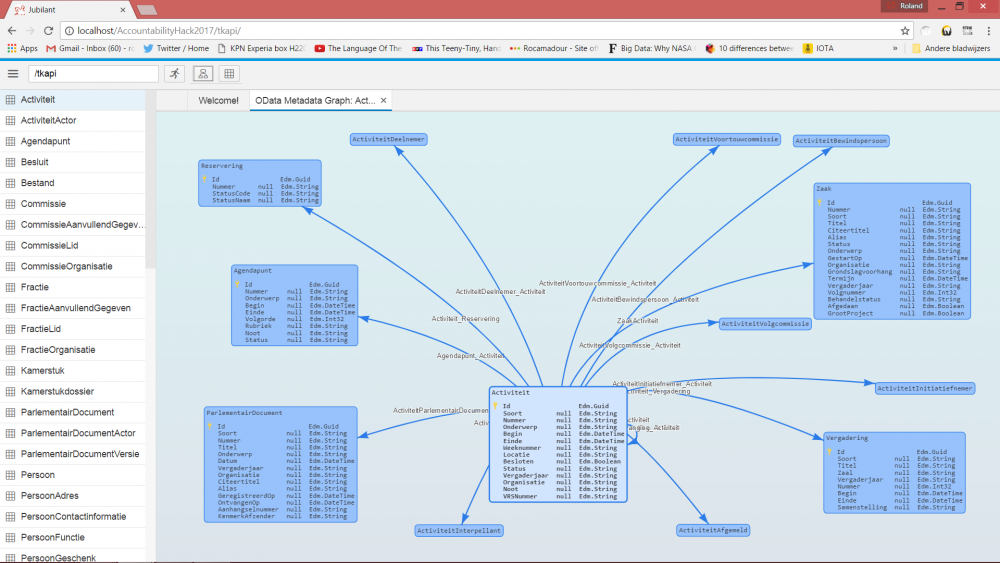 Jubilant is an Open UI5 web application that provides a plugin architecture that makes it easy for developers to write their own data visualisations based on OData services. Jubilant provides rich metadata about OData services, as well as a number of reusable components that make it easy to quickly build a query editor/designer.

The Jubilant concept allows a plugin developer to focus on making a cool visualisation, without having having to invest time and effort to provide the user with a query builder. During the hackathon I managed to create two plugins - one simple table visualisation, which simply renders raw data in a data grid, and a OData Metadata Graph visualiser, which plots the structure, entity types and relationships exposed by the OData service as a graph.

The connection to open data and the assignment for the Accountability Hack is that a number of key open data API's use the OData protocol. A good example is the Dutch Parliament API.

Interestingly, there are relatively few OData query tools available, and none of them are particularly affordable. In fact, during the accountability hackathon a few teams tried to work with these OData APIs and discovered they didn't quite know how to access and process them. I don't know if this finding influenced the jury in any way, but it certainly highlighted the need for a tool like Jubilant.

For Just-BI OData is a key protocol as well, since it happens to be the standard way of exposing data by many SAP products, like SAP/HANA. While Just-BI is a general end-to-end Business Intelligence shop, many of our customer engagements have a strong focus on SAP products. This is also reflected in the Open UI5 framework, which has rather good support for OData.

I was surprised, but obviously very happy to have been awarded the 2nd prize, which is good for 1.500 EUR. It is a honour and a privilege to be in a position to work on stuff I like and maybe contribute something to the transparency of the Dutch democracy. And, frankly, I just had a great time hacking!

Since this was basically just a working day for me, I decided to donate 500 EUR of the prize money to Just-Care, which is a charity supported by Just-BI.

Where to get Jubilant?

At Just-BI, we're currently working out the exact details around a release of Jubilant. I will write an update as soon as I can disclose more, but I can already say that all the work I did for the accountability hack will become available as Open Source Software in the very near future.