Open source business intelligence and data warehousing are on the rise!

If you kept up with the MySQL Performance Blog, you might have noticed a number of posts comparing the open source analytical databases Infobright, LucidDB, and MonetDB. LucidDB got some more news last week when Nick Goodman announced that the Dynamo Business Intelligence Corporation will be offering services around LucidDB, branding it as DynamoDB.

Now, to top if off, Calpont has just released InfiniDB, a GPLv2 open source version of its analytical database offering, which is based on the MySQL server.

So, let's take a quick look at InfiniDB. I haven't yet played around with it, but the features sure look interesting:


The website sums up a few more features and benefits, but I think this covers the most important ones.

Calpont also offers a closed source enterprise edition, which differs from the open source by offering support for multi-node scale-out support. By that, they do not mean regular MySQL replication scale-out. Instead, the enterprise edition features a true distributed database architecture which allows you to divide incoming requests across a layer of so-called "user modules" (MySQL front ends) and "performance modules" (the actual workhorses that partition, retrieve and cache data). In this scenario, the user modules break the queries they recieve from client applications into pieces, and send them to one or more performance modules in a parallel fashion. The performance modules then retrieve the actual data from either their cache, or from the disk, and sends those back to the user modules which re-assemble the partial and intermediate results to the final resultset which is sent back to the client. (see picture) 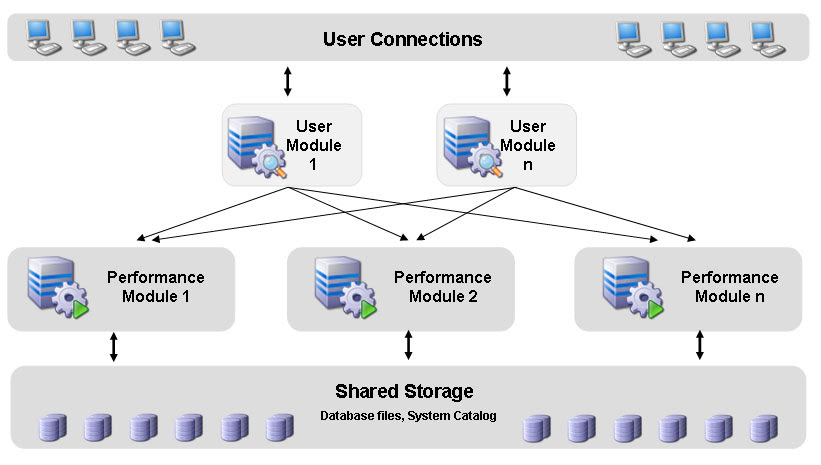 Please understand that I am not endorsing one of these products over the other: I'm just doing a checkbox feature list comparison here. What it mostly boils down to, is that users that need an affordable analytical database now have even more choice than before. In addition, it adds a bit more competition for the vendors, and I expect them all to improve as a result of that. These are interesting times for the BI and data warehousing market :)
at October 27, 2009 2 comments: Links to this post